I’ve seen her around, on and off, since October. She’s on the same course as Julie, my girlfriend. We’ve sat in the same pub a few times, with a bunch of others – and I’ve been to a couple of parties and made small talk with her. But she hasn’t really caught my eye – until now. You see, she’s a redhead, just not my type. That makes me sound shallow? Sorry but I’m a guy and I know what I like. I’ve never dated a redhead, not even slept with one. 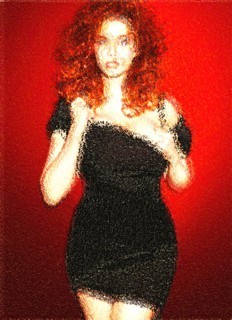 So I can’t really explain what changed, what got my attention. She is beautiful, no doubt about it; she is pretty, and she’s got that perfect mix of a curvy, sexy yet slender figure. But she’s never presented much of a temptation before. Tonight though was different, she just seemed to glow from the moment she walked into the party. Julie and I had already been there for a couple of hours. I was bored and needed a distraction – maybe a bit of harmless flirting, and some banter with the lads catching up with their bachelor lives and their sexual conquests. She provided my opportunity to flirt. Maybe her tight, short, black dress helped. I mean, what guy wouldn’t notice that? But there was also was something more. Her hair looked richer, shinier, sexier, against all that black. Her legs were stunning and long, her eyes were piercing. She was animated, shimmering, and alive in a way I hadn’t noticed before. She was certainly stirring me, turning me on.

Lust was in the air. Or in my loins.

I’m not unfaithful in my relationships but I do fantasize a lot about other girls – although since I’ve been with Julie I’ve never taken things any further. She would never forgive me. That’s kept my jeans buttoned up, thus far. But tonight? I don’t know; there’s something about her that made me have to have her.

We got chatting and I didn’t let go of her gaze… we could have talked about the economy and we might as well have been undressing each other. Anyone watching us could hardly have mistaken what was going on. It was verbal foreplay. We were standing so close now and I was painfully erect. I thought I was being forward, literally thrusting myself at her, as I do when I’m a bit drunk. But she was slowly taking control. I was very horny but I soon realized that it was she who was the predator. She was one of those women who let guys chase her until she caught them. She looked at me like I was a shy, self-conscious teenager who was long overdue an education – a sexual education.

She grabbed my hand and pushed it – not gently guided it but actually pushed it – under her short dress (I was only now noticing how obscenely short). I felt the silky material of her underwear. It was damp but it was also tiny. My fingers hardly had any choice but to explore under and find the treasure which until tonight I’d never thought I was looking for. I had foolishly felt that my own boredom and lust had led to this point, but I was now seeing the truth. She had decided that tonight she was going to have what she wanted. I’ve no idea if that was me, or just any guy she set her eyes upon. Even in my lust I hoped it might have been about me, but I was as turned on by the thought of this predatory redhead going for whoever and whatever made itself available.

She started to caress my chest under my shirt and pinch my nipples quite decisively. With her other hand she slowly, but not too slowly, made her way to my crotch and skillfully unbuttoned my jeans while moving her mouth towards mine. As she kissed she delved into my fly and released my cock from its restricted place. We were surrounded by people and in the semi-dark she was wanking me. She told me she was going to make me cum, but was disappointed that I was wearing underwear. She said all her men learn to leave it at home when they are with her. All her men? I felt like a fucking slut and it was driving me wild. She said that next time I would do the same. Oh fuck, yes, next time… I shot my load then and there. I instinctively turned away from her, assuming that she didn’t want my cum all over her dress, though turned on by just how hot that would look. Instead I shot my load over the wall and on the floor. I ought to have been mortified but I felt liberated and oh so fucking pleased with myself. She looked at me, said well done, and thrust her tongue down my throat.